Python compare every line in file with itself

I am implementing a statistical program and have created a performance bottleneck and was hoping that I could obtain some help from the community to possibly point me in the direction of optimization.

I am creating a set for each row in a file and finding the intersection of that set by comparing the set data of each row in the same file. I then use the size of that intersection to filter certain sets from the output. The problem is that I have a nested for loop(\$O(n^2)\$) and the standard size of the files incoming into the program are just over 20,000 lines long. I have timed the algorithm and for under 500 lines it runs in about 20 minutes but for the big files it takes about 8 hours to finish.

I have 16GB of RAM at disposal and a significantly quick 4-core Intel i7 processor. I have noticed no significant difference in memory use by copying the list1 and using a second list for comparison instead of opening the file again(maybe this is because I have an SSD?). I thought the with open mechanism reads/writes directly to the HDD which is slower but noticed no difference when using two lists. In fact, the program rarely uses more than 1GB of RAM during operation.

I am hoping that other people have used a certain datatype or maybe better understands multiprocessing in Python and that they might be able to help me speed things up. I appreciate any help and I hope my code isn't too poorly written.

Sample input would be a file with this format:

The output file if this were the input file would be:

...because the two sets removed contained three or more of the same user IDs. 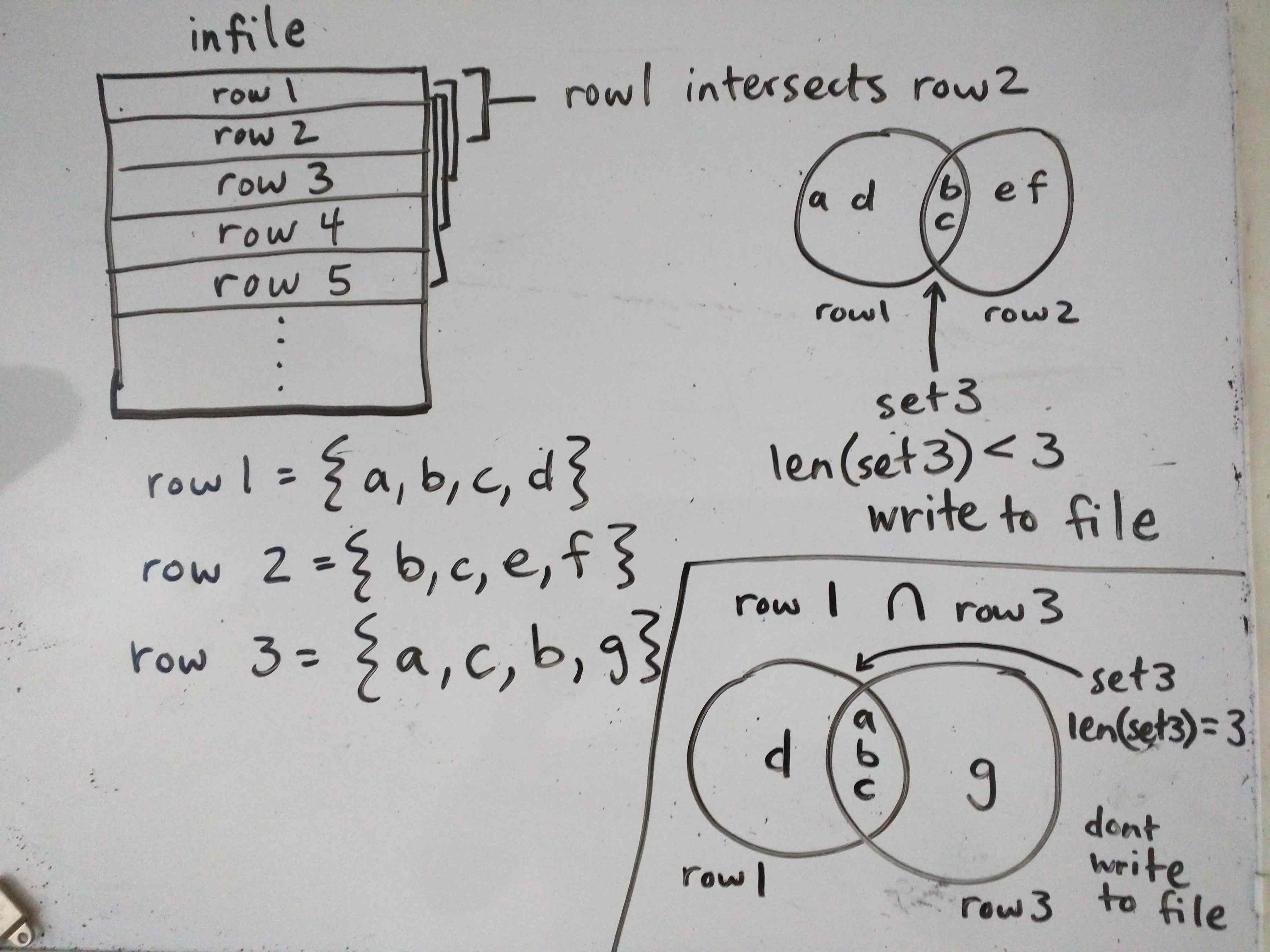 On reading the file twice

Constructing data structures is costly. You do it once for each line in the file (\$n\$ times) and then do it again \$n^2\$ times. There is absolutely no need as you could only use one list to do so:

That way, with only one list, you avoid spending time converting strings to datastructure and can focus on your algorithm.

So just build the list once and use it any time you want.

It lets you reuse your work more easily, by changing parameters. You can also more easily add code to handle command-line arguments and not need to change your code each time you change your input/output file.

I’m assuming Python 3 here for the print(datum, file=out_file) line. Change it accordingly if you are using Python 2. It, however, will change your output a bit, but more on that later. I'm also using a for loop in the else just in case there is no rows in data.

Separating concerns with functions let you focus on being efficient for simple tasks. And, if later you want to improve your code thanks to multiprocessing, it will be easier to process it in parallel (using map_async for instance).

Rather than iterating over indices and using these indices to retrieve items. Instead of:

It's both easier to read and faster. If you truly need the index, you can still use enumerate:

But as far as eliminating tests against the same line in our product you can test if the object is the same:

Note that I used is instead of == to be sure that we are performing tests on the same line and not on lines with identical values:

Python allows loops (for and while) an optional else clause. This clause executes only if the loop executed entirely without reaching a break (or a return, for what it's worth).

In your case, you could use that at your advantage in the inner for loop: instead of waiting to reach the end of the file for each line, you can break as soon as you find that two lines shares more than 3 items. If you handle writing lines in the else clause of the inner for loop, you can rely on that break to not print a line that has too many items in common with an other one.

You should have noticed that I changed the output format a bit. Now each line is a set instead of a list. It's easy to change that by calling print(list(set1), file=output_file) instead. It may change the order, but wont change the content. You could even use sorted(set1).

I don't know if you can manage the input files of if you have to build around their limitations. But in case you can change them, I suggest you have a look at the pickle module.

Basicaly, when creating your input file, you can pickle.dump a list of all rows (possibly already a list of sets) and then, load them in this script using a simple data = pickle.load(os.path.join(arg2 + arg1, 'file')).

So I found this quite an interesting problem, and poked at it a little.

I'm mostly going to talk about performance, because that's what you asked about. But along the way, I'll try and make some observations about readability, and answer the other questions you had.

You provided some sample data, but to test performance, quite a large volume of sample inputs are needed. The following small program generates those:

Producing sample output on STDOUT, according to a command-line "count" parameter (this is not nice code, it's just here for reproducibility).

Obviously, the performance of the filtering algorithm will depend not only on the number of sets, but also on the number of possible different names from which the sets are drawn, and the size of the sets. Smaller numbers of names make some approaches pathological; larger sets create more work for most approaches.

Your original program did not run as-is---it seemed to rely on a few parameters argN provided elsewhere, and a particular directory structure. So I modified it a little to accept a filename as its first argument, and output to STDOUT for easy testing. I also moved around the manipulation of the pos variable, as that seemed to either have the wrong indentation or be in the wrong place.

A few initial bits of code review on this:

To start with, I just applied some polish to the original program, maintaining the approach and spirit of the algorithm while tidying up the code.

Starting immediately after the with open line:

This is still quadratic (sadly), but the early exits combined with the other improvements does speed things up somewhat (about a factor of two on my machine with my test data).

Whenever I have a problem that looks somewhat like this one (fiddling around with sequences and collections), I wonder whether the itertools standard library module could help. It usually can.

In this case, we can use itertools.combinations to generate all possible pairings of sets (not including pairings with themselves). Then, we can intersect each pairing, and keep both sides; doing this for all pairings gives us the set of sets which we wish to exclude from the output.

This is still quadratic, but now the quadratic thing has been moved inside a single generator expression, with the quadratic expansion coming from a part of the standard library; I'd guess that this would be a relatively good place to start if you wanted to use multiprocessing to speed this up.

The greater use of optimised standard functionality also gets us a performance win: about a factor of two (so 4x faster so far than the original).

Constant-factor performance improvements don't win us very much for \$O(n)\$ problems with largish \$n\$; some kind of algorithmic improvement is necessary.

My initial thought when trying to come up with an improved approach was that matches were likely to be quite sparse---that is, most sets won't share three items (or whatever filterValue is) with each other; I would expect that most sets will share no items with each other. This is true of my randomly-generated sample data; it may not be true for your real-world data.

If that assumption holds, then the obvious place to start seems to be with a simple index, mapping elements (ids/whatever) to the sets which contain them. Then, we can perform our existing quadratic comparison, but only on sets which we already know share at least one element. If most elements only participate in a small number of sets, we are then doing our quadratic process many times with small \$n\$, rather than once with large \$n\$; this should improve performance.

Starting immediately after the sets = ... line from the previous version (also needs an import collections for the defaultdict):

A few points on this:

For most inputs I tested, this approach has both better constants and scales better than the previous programs. But it is possible to generate pathological inputs.

The index built here also introduces the possibility of doing some kind of clever filtering---for example, to avoid filtering out all the sets which mention some element (of which we have a convenient list).

Having had some success with indexing, it's reasonable to ask whether there's more to be gained from that approach. The problem with the element-based index was that it could only tell us whether sets had any elements in common; a quadratic-time operation was still necessary to filter the sets with common elements. So a natural question is whether a different kind of index could do more work for us in the data structure.

I can't think of a better way to transition this discussion, so I'll just say: we can get what we want by using ngrams as keys for our index. This requires only a small evolution of the previous approaches: we can use itertools.combinations with filterValue as the length parameter to generate all of the possible filterValue-length subsets of each set. (We need to sort the input to itertools.combinations to get consistent output).

Then, we can just look up each key (unique filterValue-length subset); whenever a key maps to more than one input set, those input sets have at least filterValue elements in common.

The code is straightforward:

I think I've previously explained all of the things that go into that final version.

It should also be straightforward to parallelize this version: the expensive operation is generating the index; partial indexes can be generated independently, merging indexes should be quite cheap, so it's a good candidate for multiprocessing.

Having the indexes available would also enable more interesting behaviours, particularly if the element->set index from the previous version was also available. For example, it would be straightforward to keep some filtered sets (say, the single largest filtered set) to avoid dropping elements entirely.

Perhaps I got a little carried away with that, but it was enjoyable to poke at.