I wrote this for a problem in one of the online contest at hackerearth. Problem statement is:

The first line contains the compressed string in form a2b4h5a2

You have to sort the expansion in increasing order(a-z). ie. aaaabbbbhhhhh

This is followed by Q that indicates the number of queries.

For every question output the Kth character if it exists else print -1 .

It works correctly as intended, but help me make it faster as it exceeds time limit for that portal. Any constructive criticism and advice is appreciated. :)

The idea is that, I made a integer array of size 26 to store the respective frequency of characters, thus sorting step is done automatically. Then just started subtracting the frequency value from the query until its zero or negative, that index is the required alphabet.

Enabling your compiler's warnings would tell you that c is unused.

This is pretty weird code and according to my compiler warnings, might be undefined behavior.

More about this here.

You are mixing literal characters (like 'a') that are easy to understand and ascii values (like '97') for no obvious reason. I'd rather have the literal characters used everywhere. It makes clearer the fact that we try to convert chars to indices in once case and to numbers in the other case.

It would probably make sense to use a temporary variable for str[i] in order to make things clearer.

The variable names you are using could probably be improved. Among other things m seems pretty cryptic to me.

At this stage, I have the following code:

On this kind of task, it is usually worth trying to split the input/output logic from the actual computing logic. Here, you could define 2 functions : one to initialise some object like structure from a string, one to use the structure to get the Kth character (K being the argument to the method).

This would allow you to write unit tests which would help you improve your algorithm.

You have used the correct ideas : use the proper data structure to store the different values used.

An improvement you could implement is to define a structure with the cumulated numbers that you compute once so that then you can get the kth element with a simple array lookup (actually as suggested by ChrisWue, maybe you'd need a binary search and not a single lookup). When multiple queries are performed (which is I think what is happening in your case), this should make things much faster.

The idea of doing some ("long") preprocessing once to make (multiple) queries much faster is a pretty classic solution in real life and in programming challenges.

are harder to read than they should be. Use whitespace to make the code easier to read and understand:

The for loop above isn't technically incorect, but it's odd-looking for those who are fluent in C. The issue is that this i = i++ should just be written as i++.

This code declares a variable c but then does nothing with it. Your compiler is smart enough to help you find this kind of problem if you know how to ask it to do so.

This code has a number of "magic numbers," that is, unnamed constants such as 26, 48, 10000, etc. Generally it's better to avoid that and give such constants meaningful names. That way, if anything ever needs to be changed, you won't have to go hunting through the code for all instances of "3" and then trying to determine if this particular 3 is relevant to the desired change or if it is some other constant that happens to have the same value.

Since you're using 10000 as both the size of the buffer and as part of the format string for scanf, it's a little bit tricky, but there's a nice way to do it in C:

Now when you want to use BUFFLEN as a number, it can be done like this:

Using it in the format string is a little different:

See the gcc explanation of stringification for details on how and why this works.

Ultimately, what your program needs to do is to take an input number and produce the corresponding number. The current code has the right idea in that it uses a data structure rather than an explicitly uncompressed string, but there are potentially better ways to store the data. Consider using a tree structure instead (or in addition to) the existing structure. Each node could store the cumulative count and the associated letter, so finding the answer would simply be a matter of searching the tree.

For example, the given example string translates to aaaabbbbhhhhh. That could be represented by the following binary search tree: 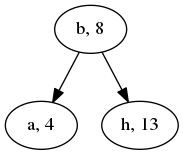 Only two comparisons are required instead of 10 that would be required for a linear search of the existing structure.

The calls scanf can fail. You must check the return values to make sure they haven't or your program may crash (or worse) when given malformed input or due to low system resources. Rigorous error handling is the difference between mostly working versus bug-free software. You should strive for the latter.

Eliminate return 0 at the end of main

Since C99, the compiler automatically generates the code corresponding to return 0 at the end of main so there is no need to explicitly write it.

Apart from that I can't really fault your algorithm - you count how often each letter is there and then go look for the bucket. One possibility would be to calculate the running sum of the final ar

Not the answer you're looking for? Browse other questions tagged beginner c strings programming-challenge or ask your own question.