I wrote a doge meme generator in racket some time ago, mainly as a joke, and I would like some criticism about the general style and what could be improved.

Here is how the program output looks : 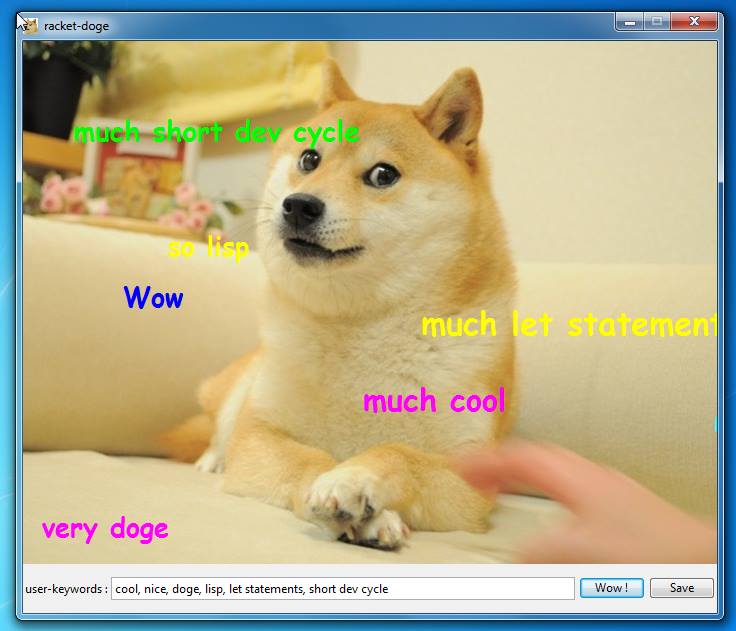 There's lots of indentation that should be on a single line instead. Including most of the lets. There's also no reason to keep nesting lets when you can just add additional definitions in a single let. E.g. for make-gui it's entirely feasible just to have a single let instead of four.

The save-but function doesn't need "./" in there, that's already what will happen there's no additional path specified.

The bitmap should be only read once from disk; the additional read when pressing the button is not necessary. Hard coding the 700x500 dimensions into the code is also something that could be fixed by querying the image (or the thing it's drawing on) for its size instead, making it way more flexible in the process. You should probably also add a way to specify the output (and input) filename while you're at it.

random-member is not efficient, see Rosetta Code, i.e. it should be something like (list-ref my-list (random (length my-list))) instead, while not shuffling the entire list.

Otherwise I don't see too much to complain about; the variable names could be more descriptive (save-but) and less truncated (horiz), also the overuse of my- is a bit annoying (by which I mean that the prefix doesn't provide the reader with any additional information).

Not the answer you're looking for? Browse other questions tagged image graphics racket or ask your own question.