Here is my next Java assignment: create a Matrix class that can add and multiply two matrices together. I was given some code as a skeleton and then fleshed it out a bit.

Is there any way I could cut back on the amount of code present, or increase the performance of the multiplication method? And any other notes about my code would be greatly appreciated.

It would be good to note that the code must also pass this test code, which I am not allowed to modify (therefore please do not review this):

I will mostly focus on performance in this review because you have specifically asked for it and the other reviews did not cover it yet.

The first thing to do when optimizing for performance always is to measure. So I wrote a small benchmark for your matrix multiplication.

It is generating a number of pairs of random matrices of compatible dimensions, computes their product and times the operation. After a warm-up phase for the JVM, the timing results are printed to standard error output. I'm also printing a random element of the result matrix to standard output to avoid the JIT compiler optimizing the entire product computation away.

You'll notice that I have added a static method randomMatrix to the Matrix class.

I have also made multiply a static method that takes two Matrixes because I find this more natural. If your assignment requires the non-static version, you can easily implement it in terms thereof.

Now let's look at what can be improved.

Use a contiguous data layout (major)

It would be better to store all the data in a 1-dimensional array and remap the 2-dimensional indices into that array. This way of storing a matrix is more natural than it might seem at first sight. Look at how you would write down a matrix on paper.

If you were to fill in all the elements, you can either do it row-by-row or column-by-column. If you count how many elements you have already filled in, this will give you the index of the current element in the 1-dimensional array. Another way to think of this is to cut the paper into stripes such that you'll get either row or columns vectors, then glue all those stripes together to a long 1-dimensional stripe. Storing the matrix data as row vectors is known as row major order; storing it as column vectors as column major order. There is no real reason why one layout would be better than the other but once you've settled on one, it is important to write the matrix traversals with this layout in mind (see later). I will use row major order in the following because I find it more natural and it comes closer to how 2-dimensional arrays work in Java. That means that the matrix from above will have the following memory layout.

…and you'll get back the familiar notation.

If we are given zero-based indices i and j for an n by m matrix, we can get the index of the matrix element in the array as i * m + j.

So you would replace your

(Forgive me for having renamed your columns attribute to cols. I couldn't get my fingers used to type the “umn” any more.)

Checking arguments in public functions is good but for your internal use, it adds mostly overhead. In Java, you'll get well-defined behavior for accessing an array out-of-bounds anyway so any additional check doesn't increase security but only produces more descriptive error messages. This is fine for client-facing methods but unneeded for internal use.

and another private method to validate indices.

Then implement the public interface in terms of these.

In your internal methods, you'll always use the “unchecked” versions.

Since the accessor functions we'll use internally are now private and private methods are always statically bound, we also save a dynamic call indirection. Since there is no good reason to override get or set (and I'm not a fan of inheritance in general), we can make these final too which might enable the JIT optimizer to devirtualize calls to them, too.

Have a look at your multiplication routine.

The code is calling getRows and getColumns over and over again even though they will never change during the method. For one, you could access the private attributes rows and columns directly. This would certainly save you the function call but if you're unlucky, the JIT compiler might not see that the attributes cannot change and reload them every time. If instead you cache the values once in local variables, you're telling the JIT compiler that they cannot change and it may optimize accordingly.

Not only will it help the optimizer, I also find the code easier to read.

Note another optimization applied in the above code. There is no need to update product in each iteration. We can accumulate the result in a local variable dot (named such because it is a dot product) and only store it after the innermost loop. However, read on for an even better optimization.

The hardware really loves iterating over memory in linear order because this enables most efficient caching and cache memory is much faster than main memory on modern hardware. We have already somewhat enabled this by storing our data in a contiguous array but now we have to optimize how we traverse it.

First look at addition because it is really simple. There are two (obvious) ways to iterate the matrix: row-by-row or column-by-column. Since we have decided to store the data in row major order, we really should iterate row-by-row because this will give us linear memory access. (If you find this hard to imagine, sit down with a sheet of paper and do a matrix operation by hand. See how different memory locations are accessed.)

Note how there isn't even a nested loop any more. (At this point, we might want to go back and apply the same trick to randomMatrix.)

For the product, the solution is a little less obvious but incredibly important.

Be sure to exercise this algorithm with pencil and paper to realize that the memory access in the innermost loop is now indeed linear. This gives tremendous performance gains.

Note that the implementation relies on the fact that arrays are default-initialized to all-zeros in Java.

Another minor optimization baked into the above method is that I'm accessing product.data directly rather than through getUnchecked followed by setUnchecked to save one index computation.

I have compared the effects of using contiguous storage and changing the multiplication algorithm to have a linear memory access pattern. The following graph shows the results of the benchmark shown at the very beginning for three stages of optimization.

The ordinate shows the performance in mega-FLOPs per second. A FLOP (for floating-point operation) is defined as a floating-point multiplication and addition as it occurs when computing a dot product. (Some people use different definitions.) For given matrix sizes, the number of FLOPs is given by $$ \text{FLOPs} = nlm \enspace. $$ If computing the matrix product takes time t, then the algorithm has achieved a FLOP rate of $$ \text{rate} = \frac{\text{FLOPs}}{t} = \frac{nlm}{t} \enspace. $$ Therefore, in this graph, higher values means better. 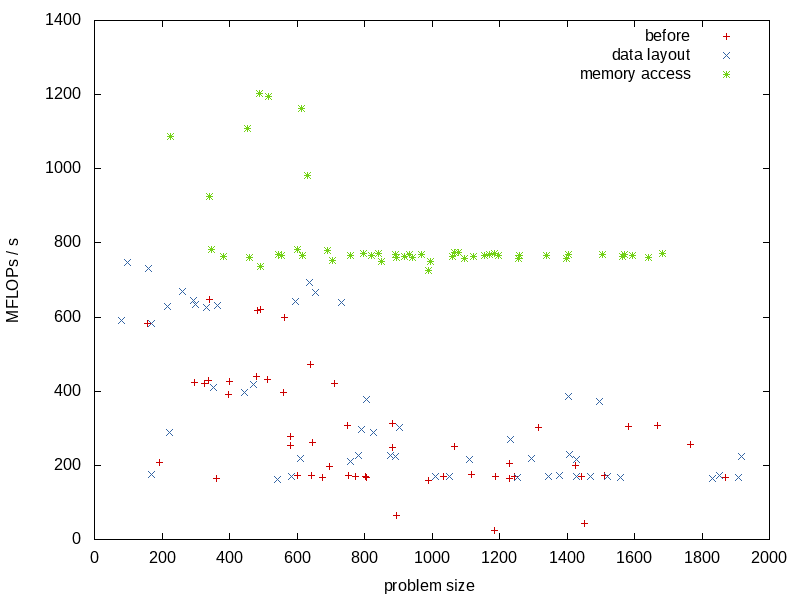 It is easy to see that while the contiguous storage helped somewhat, what really rocked the performance is optimizing the memory access pattern. Simply interchanging two lines of code made the algorithm four times faster! You can also see that the optimum is far from reached. In particular, it is embarrassing that the algorithm doesn't become faster for larger problems as one should expect. I must say that I am not an expert in JVM tuning and the benchmark itself might not be 100 % meaningful.

I don't have much to add considering your coding style. Your code is already generally well-written. Just a few minor remarks.

I'm a big fan of the “abstract, final or empty” rule. Since your Matrix is not designed for extension, declare all methods final. Alternatively, declare the entire class as final.

Since your MatrixException derives from RuntimeException (as it should), there is no need to declare it in the throws specification. Mentioning it in the JavaDocString is still fine.

Besides @vnp's suggestions, you should have specific exceptions, instead of storing that information in the reason. Some examples:

The names suggested are a bit verbose, but transmit the idea well. Name at your own discretion.

I know you said that "please do not review this" in the main body, but in the comments you told me otherwise.

All exception tests are flawed

There are large number of unit tests that check exceptions using the following syntax:

These kind of tests can be bypassed by just returning instead of throwing an exception in an error condition.

For example, the following bypasses the test:

Exception checking should be done by either using 1 test per failure statement and then using @Test (expected = IllegalArgumentException.class) or by failing the test after the exception

Not the answer you're looking for? Browse other questions tagged java performance object-oriented matrix homework or ask your own question.

4
Speeding up nested for-loop analysis code
24
Enter the Matrix
3
Search in a 2D array to find if there is a row or a column that contains the word “error” in every cell of that row or column
4
An assignment algorithm in C
4
Find all sub matrices of type N*M in it which are palindromic
1
Recursive matrix multiplication
7
Leetcode 54: Spiral Matrix
6
4×4 matrix multiplication
4
Getting saddle points of a matrix