This picture inspired a contest between a few of my friends to rewrite this code in more proper OO style. 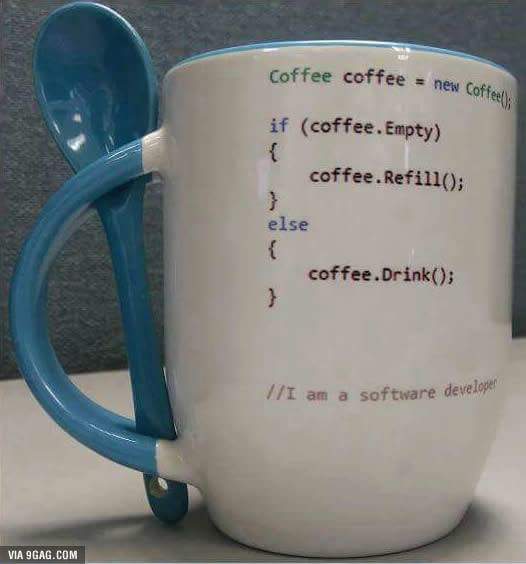 This is what I have come up with. Any thoughts:

There is no way that person can be null. After being created, you never set it to anything else. Funnily enough, I thought it was going to be my most used feature of C#6 but I almost never use it.

C# generally never uses SHOUT_CASE. Your constants should be PascalCase.

If you're going to set an explicit value for one enum member, I'd say you should do it for them all:

I'd argue that your model is a bit off here. Espresso is black coffee i.e. it doesn't have milk in it.

I think that in general this isn't an enum. What if I want a decaff coffee? I think you need a drink class that can be composed.

I don't see the point in these fields:

You already have an enum - make sure you have implemented equality correctly and let people create their own mug cup.

If you want to know about Cups you need to have a Cupboard:

This is an odd method:

Why does it matter if the cup is empty?

You should either TryDrink if the action might not occur. Or, if you think your person (like me) is going to commit to drinking whatever is in that cup then you should always let them do it.

Using int.TryParse() would be better so any invalid entered character won't throw an exception.

You don't really set an amount here. Try to find a better name.

Instead of if (someBoolean == false) you should use the more idiomatic way like
if (!someBoolean).

I'd say that there's a flaw in the logic of the code in the cup :). It should be more like the following:

That being said, regarding your code, I'd just remove the following lines:

as they don't add anything of much relevance IMO.

OO-wise this is a spilled cup. It's all over the place. You've got everything except a CupOfCoffee. The "dispenser" in the title can only be inferred w/in the spillage.

Not the answer you're looking for? Browse other questions tagged c# object-oriented or ask your own question.