On almost every page in the Stack Exchange Network, there lives a list of some the current "hot" questions across the network (sometimes abbreviated HNQs). Some of these posts have very exotic titles (especially the ones from Arqade) and some have very simple titles.

Either way, I've always found it fun to try and guess what site an question title is associated with. As a result, I created a UserScript that plants this game into a Stack Exchange webpage.

The source code can be found on GitHub and you can download the extension here.

This was meant as a small project for fun, but I still have a few questions.

Don't feel the need to answer all of these in an answer. Any other recommendations are also appreciated.

Why not bundle this all in createTopbarButton? 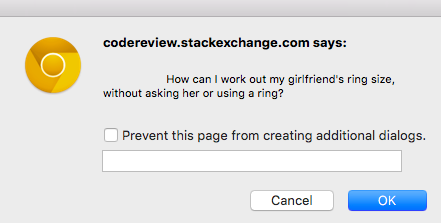 (I couldn't identify the issue, though...)

Your regex does a search through the string for instances of the characters, but what happens if I put in a single character, a vowel, for instance?

Using e as a challenge string gave me correct answers in most cases.

Instead of using and calling globals, use a prototype chain instead.

That kind of format is better for linking functions and variables, which then you can use this to store internal variables, just like in your HNQ constructor.

Your, or perhaps, the usage of alerts is kind of annoying.

I always found alerts like forcefully delivering a message, you want to be delivering it peacefully and in a nice dialog, thus, I would suggest creating a dialog box, or using a dialog plugin.

Additionally this will allow you to deliver the content better and add an end game button for when you want to end the game mid-game.

Beyond that, I would consider implementing a score check, and from that a check to make sure you don't ask the same question twice in the game.

Your comment in the following block is a tad wrong.

The function doesn't do a "single" round, it starts a loop.

This script attempts to append itself in chat.stackexchange.com, where it fails because the header doesn't exist.

For equi-probability (well as near as possible) use :

6
SEDE query to find users with exactly one post in a particular tag
25
Code-Q2A - copy code blocks from questions to answers
37
When "How To Ask" is too subtle
40
Beta-Blue B. Gone
20
Stack Exchange Post Reminder
6
Stack Exchange userscript for showing spoilers on questions with particular tags
4
SmokeDetector report notifier
12
Vue - It's the Royal Game of Ur
1
Get average post score of TOP 10 tags on StackOverflow using Stack Exchange Data Explorer