Finding a loop in a directed graph in Python

I wrote this code to find if a directed graph contains a loop or not. I am pretty new to graphs and I saw some examples on the internet but couldn't actually understand their implementations. So I read somewhere that you can colour mark the nodes. So this is my iterative implementation of that method. Is it an okay'ish' approach and how can I improve on it if it's correct?

These are the test cases

Lets first review your code, and then introduce you to one alternative on how to do unit tests in Python.

Here is my refactored code, renaming dfs() to detect_cycle() and adding some comments and docstrings:

One thing I haven't addressed if whether this is the most effective way to check for cycles. In fact I know it isn't as for each vertex we traverse the graph over and over again.

This implies that the current algorithm has an \$O(n^2)\$ complexity, which most likely could be simplified utilising another list of visited vertexes, and instead of looping through all vertexes, one could visit only those not already visited. This is left as an exercise for the reader... :-)

Multiple options exists for doing unit tests in Python, and it comes down to personal preferences. Here I'll present you for the internal version, namely unittest, which suffices for this code.

A common pattern for a unit test is the following:

In your case the tests are rather simple, so I've done some according to this scheme, and for some I've taken a few shortcuts. But even though the tests are simple, do remember to let one test method only test one thing. It is considered an anti-pattern to have multiple actions or asserts in one method.

Using unittest, I find that using a class name like test__function_to_test is a nice pattern, although not entirely according to guidelines. This should inherit from unittest.TestCase enabling us to easily run the tests using unittest.main(), which will run all tests functions starting with test_.

So here are your tests, and some more. The following code is added beneath the other code (with exception of import at top):

Notice how I tried to give meaningful names to each of the test methods so that it should be understandable what failed if/when they fail. If everything is OK the output would have been:

However I've deliberately added a fault, with an message, so the output if you run this code is:

Notice how the 'dots' have changed to include an F, and that the FAIL: line names that is was the test_confused_graph_result() in the test__cycle_exists class which has failed, and you get some details as to what failed.

If the test is well written you should now easily see why it failed, and hopefully understand what went wrong.

Algorithm is not correct for directed graphs, but it would work for undirected graphs. Consider a graph like one below. It is acyclic (DAG) but your code will detect a cycle. Test case here. 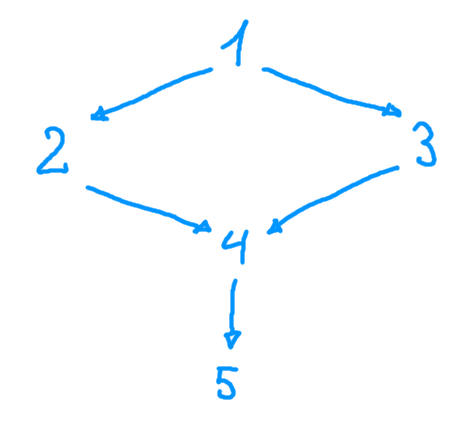 Not the answer you're looking for? Browse other questions tagged python graph depth-first-search or ask your own question.