I have spent a few days coding an ATM. What I'm looking for is some critique of my work. Is there anything I can do better here?

The entire project has 9 files and one class, a checking account and savings accounts. It also has a section for loans (thought it was different). Any advice, or input would be greatly appreciated.

To copy this from github the link is: https://github.com/13aal/ATM/tree/master

To make it run use run.rb 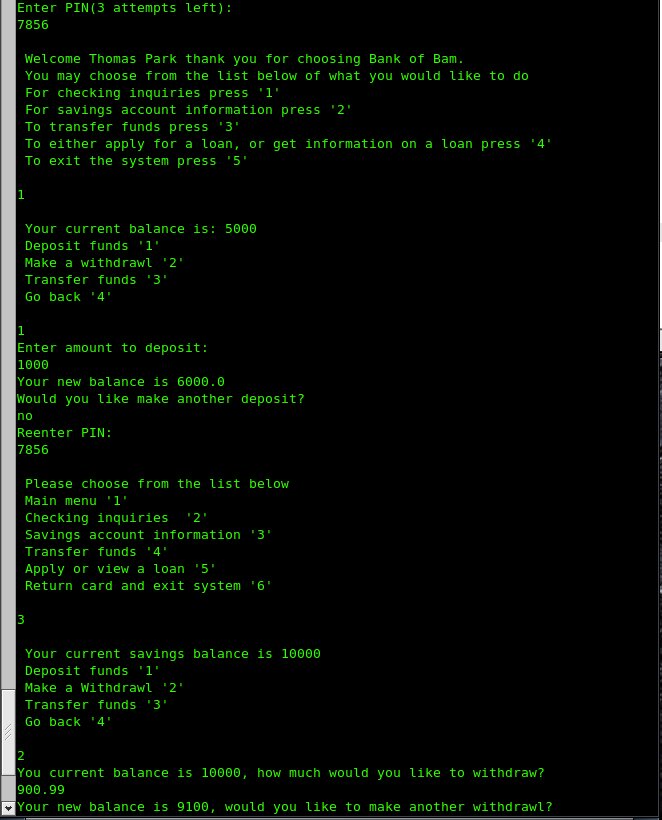 Entering numbers does not feel user-friendly, allowing letters is much more intuitive and just as easy to implement:

first is there to allow deposit or make to be valid inputs.

Ruby is a high-level language, where while has a limited use. Any-time you use while think twice.

Should be written as:

The second version is not only shorter, but also easier to read.

But you are a programmer! Programming was invented to avoid repetitive tasks!

This way you can be sure that no value is being left out and can easily modify the loan list.

If you convert amount to integer you will lose all the decimals!

This is not what you want as you then call to_f

A number is named magic when it appears randomly in the code with no specification as to why it has the value it has.

You should give them a name to allow easier code reading and future changes:

Names of constants are ALL_CAPITAL by convention.

You give a lot of output and ask for a lot of input, I suggest a function:

You can then simplify your code, for example:

Other functions may be similarly cleaned up.

May be written as:

Because the compiler / interpreter can automatically check code for correctness but not comments.

First thing I notice, is that user input/output is mixed in with the account manipulation logic. It's all tangled up. You've split things into files, but haven't split them by responsibility, which the key thing.

Second, and this is related to the first, I notice that your savings and checking accounts implementations are basically identical. Only the name is different.

At its core, an account has a balance, and said balance can be queried and increased (deposit) or decreased (withdrawal).

In a more object-oriented manner, this could be modelled as:

Of course, there's a little more to it. You'll want to check that the amount values passed to the #deposit/#withdraw methods are indeed numbers - and that they're positive numbers so you can't withdraw a negative amount and end up with more money. And, depending on the account it might or might not allow for overdraw. Stuff like that.

Note that this class doesn't do any input/output. The point of the Account class is to act like a bank account; not to act like an ATM in and of itself. That's left up to other code.

Said other code could be an ATM class. It'd be its responsibility to handle user interaction and manipulate the account(s) in some way. Or, depending on how far you want to go, you could have a separate controller class that implement the account manipulation logic, but again leaves the interface up to yet another bit of code.

Anyway, we still have more data modelling: The second set of data (or model) we're working with is the customer. The customer could be modelled like so:

Now, you have a customer against which you can check the PIN, and the customer has a list of accounts.

Again, this can be embellished is many ways. One thing to note, though, is that the PIN isn't readable by the outside - and certainly not writable. It's not really a concern for a test project like this, but conceptually the PIN should be kept secret. You can check if an entered PIN is correct, but you can't just ask for the real PIN once it's been set. That'd be too easy.

Now, for the interface/controller. You've got at least 2 common interactions:

In both cases, you'll want a way to re-prompt the user if the input doesn't make sense.

Whereever you place the interface logic, it'd be nice to make these parts into generic methods. Such methods could look like:

Both #menu_prompt and #amount_prompt use #get_input to actually get the user's input. However they pass along different blocks for checking said input (one requires that the input matches an item in the menu, and the other requires it to be a numeric string, possibly with 1-2 decimals). If the check fails, the user can try again.

You could use the same thing for the PIN entry:

Of course, this would just let someone try every combination, since the machine would just keep asking. But it's a start. You can either add the max-attempts logic to #get_input, or you write a wholly separate method specifically for prompting for a PIN.

Whether this specific way of doing things makes sense in all cases is up to you to find out. The point is that logic has been encapsulated and been made reusable.

As Caridorc pointed out you have a rounding error in your code because you switch between floats and integers in some places. A common way of avoiding this is to always treat amounts as integers, but in smallest unit of currency. So in the case of dollars, you'd use cents. It's not a perfect solution (e.g. interest rates that add fractional cents will pose problems), but for these purposes, it's safer. You do however have to divide or multiply by 100 to get the actual dollar amount whenever you're presenting it to the user or getting his/her input.

You also have another bug related to type/number conversions. Specifically this bit: pin_num.to_i. That won't work if the PIN starts with a zero. Technically, 0003 is a valid PIN, but once you convert it to an int, it becomes just 3 - not what the user entered, and not a proper 4-digit PIN. This is also why I used a string for the PIN in the Customer class example.

On another note, writing private doesn't do anything: All you methods are in the global scope (in effect, they're added as methods on the global object), so they're all at the same visibility level anyway.

Finally, the Ruby convention is 2 spaces of indentation. Not 4 spaces, not tabs. Always use 2 spaces.

This will be a very short answer you already have great answers that cover all the important stuff. Something not important about your code but about functionality is your menu choice. Something important to remember is user will have a muscle memory of your system.

The problem with how you propose you option at the moment is that if you're adding an option, you first reflex will probably to increment the "exit" option to 7 and add the new feature as 6. Your users will probably have a hard time adjusting to that change if it's used.

An option is to leave space for future changes. You could have used 0 or 9 for the exit and that way it feels more natural if you add more features.

An other option is using letters like @Caridorc proposed in his answer. This will leave you with a lot more option without breaking previous choices. The thing to consider when using letters is to be consistent over all the menus and option. If you use E for exit, don't use E elsewhere to edit.

This is more important in bigger programs with a user-base, but I wanted to leave that critic as a thing you need to think sometimes.

Not the answer you're looking for? Browse other questions tagged ruby finance or ask your own question.