The concept is very, very simple: let's do merging run by run (a run is a range without decrement).

This is slower than Timsort, right?

The algorithms in the standard library which care about order usually have an additional overload that takes a comparison function to replace operator<. It can be useful to compare instances of types that do not have an overloaded operator< or to compare things differently (for example, passing an instance of std::greater<> to std::sort will sort a collection in reverse order). Transforming your algorithm to take such a comparison function is more or less trivial:

From a style point of view, your code could use more braces to avoid a potential Apple goto fail; bug and to let it breathe a bit more. Also, when you have to comment almost every line, it's almost always better to put the full explanation along the algorithm and not into it.

You also seemed to be concerned about the performance of your algorithm. I tested it with several patterns and compared it to several stable sorting algorithms that I had in a library. It always sorts an std::vector<int> with \$10^6\$ elements. Here are the results (Stable sort is std::stable_sort, yours is the natural mergesort, the other algorithms are not in the standard library): 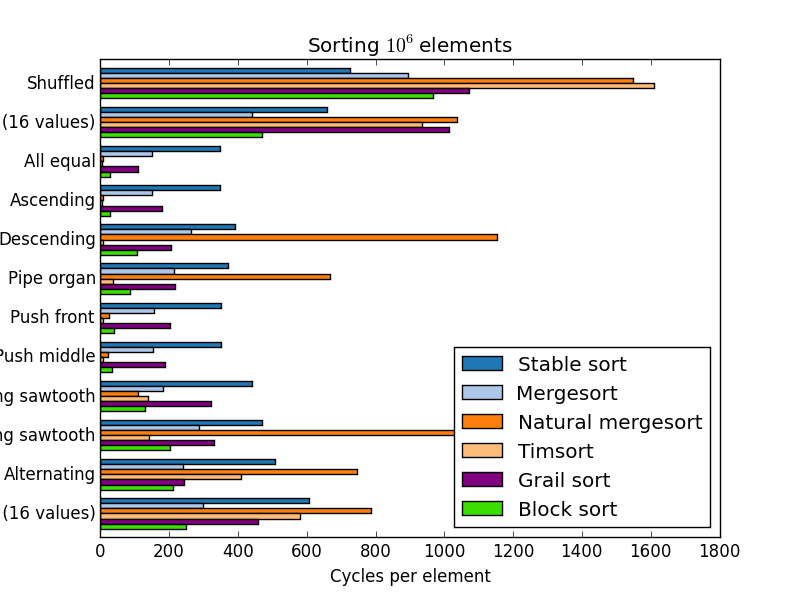 As you can see, you algorithm is a bit better than Timsortfor its worst case (random data) and beats every other algorithm for the very specific "ascending sawtooth" pattern, which corresponds to a succession of ascending data (more or less log2(std::distance(first, last)) in our case). However, it slower than almost any other sorting algorithm whenever the data isn't mostly sorted in ascending order and it really doesn't like descending patterns.

You scan the natural runs, merge them pairwise. Then you do the second merge pass counting the (combined) runs once again, and so on. You could scan all the natural runs prior to merging them pairwise and store their respective lengths in a FIFO queue (call it \$Q\$). Now your algorithms would be conceptually something like

Also, since you use std::inplace_merge the space complexity of your algorithm is constant, yet that comes with a price: the worst case complexity (random data) of your implementation is actually \$\Theta(n \log n \log n)\$.

Not the answer you're looking for? Browse other questions tagged c++ algorithm sorting mergesort or ask your own question.