This is a simple application that will eventually manage certain files for video games. For now, I'm only posting code that handles fetching, adding, and viewing games.

I'm trying to keep things incredibly simple and pure while learning WPF and MVVM, so my goal is to avoid frameworks. Please note that I'm not too concerned with the UI at this point, so I'm only interested in XAML/UI suggestions if they serve to improve my implementation of MVVM or if I'm missing easy/common shortcuts. Also, I'll omit the service, repository, and ViewModel classes unless they are requested.

MainView and MainViewModel - I won't share the code for these. MainView simply has a GamesView and a button to open the ManageGamesView.

GamesView - A simple ComboBox (appears on the MainView above). Used to select the current game.

ManageGamesView - A screen used to add and remove games 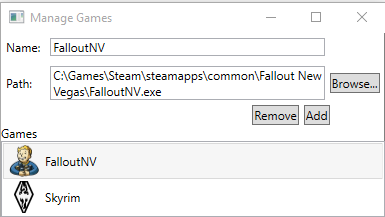 Please note that the SelectedGame property here is simply what is selected in the ListView. SelectedGame in GamesViewModel is an application setting.

My concerns are pretty much all related to one another. I could be worrying about nothing, but I can't fight this feeling that I'm missing a pattern or solution that would address all of these issues at once:

I think that does it for now. Feel free to offer any suggestions. Although I'm trying to avoid frameworks, I'm open to using them if they simplify my design and/or easily resolve my issues.

Disclaimer: I don't review Xaml, I focus on the C# part only.

The first comment // e.g. Minecraft.exe is only adding noise to the code. Its perfectly clear that the ExecutablePath property holds exactly what the name implies. Adding the comment doesn't make this more clear.

Vertical space aka new lines doesn't cost anything, you should use them to make your code more readable. At first glance (especially with old eyes) it is hard to see that the setter consist of two instructions. Do yourself and Sam the maintainer something good and use some more lines here like

If you by any chance are using C# 6.0 (implemented in VS 2015) you should use the nameof operator like so

which has the advantage, if you choose to rename the property to something else using the default refactoring tools ( Rename F2 ) this will be changed too.

In the SelectGame property setter the doubled brackets if ((value != null) && (Settings.Default.SelectedGame != value)) are not needed. You can change this to

I don't really like the saving of the Setting.Default in this setter. I have the feeling that this should belong to somewhere else, but not in the ViewModel which should be responsible for the interaction between the View and the Model and should contain primary the logic regarding UI.

The OnSomeEvent pattern is widely used by the eventsource, the object which is raising the event. The eventhandler usually is in the form of EventSource_Event or Event. You should rename OnGamesChanged either to GamesChanged (which I prefer) or to GameService_GamesChanged.

I will come back to the events part later.

Omitting braces {}, although they are optional for single instruction if, can lead to error prone code.

I'm using an event, GamesChanged, in the GameService class to alert my ViewModel to CRUD operations. This feels wrong and slightly WinForms-ish.

Well, the GameService shouldn't have anything to to with any UI related stuff, so it can't be neither "WinForms-ish" nor "Wpf-ish".

Having and raising events is just the way how children should talk to their parents. If the ViewModel should react on any CRUD operation of the GameService then using events is the way to go.

Using the INotifyPropertyChanged event for such a case wouldn't be good, because typically this event is used for binding clients and like you mentioned yourself

I thought of implementing INotifyPropertyChanged in my service class, but I'm not quite sure that would work since I would have to invent a new property to watch.

which leads now to

Because of issue 1, I needed the same instance of GameService in both GamesViewModel and ManageGamesViewModel so that they could each react to changes to the data simultaneously, e.g. adding a new game in the Manage Games screen refreshes the ComboBox on the main screen. Assuming I've taken the right approach in using an event from the service, is my use of a singleton property acceptable? In WinForms, I would have passed an instance of GameService in the constructor of the form, but I don't believe that's possible for my ViewModel because it is instantiated in XAML without arguments. Since I'm trying to stay very simple, I'd like to avoid an IoC container right now.

You don't need to use constructor injection you could simply use property injection. There would be no need to have a Singleton then.

For this part you just need to ask yourself: Do I need to react on changes made to this collection ? If the answer is Yes you should keep the ObservableCollection<T> otherwise skip it.

I would like to suggest that you don't use the event GamesChanged in the way you do it now. It is adding a big overhead if you need each time to call _gameService.GetAll() although maybe only one Game is added or removed.

I would like to suggest that you add your own event arguments which contains for instance the action which took place (by using an enum) and the Game object in question, which would make it easier to update your objects.

You are right. You don't need the GamesChanged event. GameService seems to be something like a ViewModel, but the ManageGamesViewModel holds the games. I would move the ObservableCollection<Game> Games to the GameService class, because it seems that your GameService class has a List or something similar to this. Your code will look e.g. like this:

In the ManageGamesViewModel you wrap _gameService in a public property with the RaisePropertyChanged Method in the setter:

And now you bind to the Games Collection like this:

Not the answer you're looking for? Browse other questions tagged c# .net xml wpf mvvm or ask your own question.

4
ListView MultiSelect, MVVM and RoutedCommands
5
Adding groups to ListView depending on the data in a list
4
MVVM, Navigation, and More - Part 3
4
Creating and Editing a UtilityMeter
5
DialogService which can return a result and closes Window
7
AsyncCommand using MVVM and WPF
2
PDF conversion and timestamp tool
3
Correct use of MVVM and MouseEvent Handling
1
Async Check for Domain Fullname With WPF and Caliburn.Micro