Algorithm to transform one word to another through valid words

I have been practicing backtracking and I wanted to know how I can improve my code. For eg, I don't want to use global. Also, I am not sure if my code will work for all the cases.

Whenever you're writing an algorithm, it should return the answer. Not print and return, not just print. Just return. If you want to print, you can always write print some_algo(...).

We can write this a little cleaner. There is a zip() function in the Python standard library that can walk multiple iterables at once. (In Python 2.7, we should use itertools.izip() since that won't generate a whole list up front). The advantage here is that we can write:

That's the same as return expr

But this is error-prone (and relies on global state). Instead of modifying potential_ans, what we can do is provide a new object to each recursive instantiation. This leads me to...

Now, you want this to be entirely self-contained. You're right in wanting to avoid global variables - and you have most of the right idea in that we want to recursively call down with the next word. The one change is the last argument. count isn't really meaningful here. What you want instead is the path you've come so far:

That way, our path is local rather than global. Then we just walk the rest of the words as you're doing:

Of course, we'd need a sensible default cur_path. Let's avoid the user having to come up with one:

There are four other answers here, and they all have very sensible advice. But none of them, as far as I can see, points out the terrible runtime complexity of the chosen algorithm, so I think an additional answer is necessary.

As pointed out by Barry, ths is because the line

is a mistake for:

In what follows, I'm going to assume that the bug is fixed.

The problem being solved here can be thought of as a problem on a graph, in which each word is a node of the graph, and two words are connected if they differ by one letter. Supposing that the words are cake, came, camp, dame, damp, dike, dime, lake, lame, lamp, like, lime, and limp, then the graph looks like this: 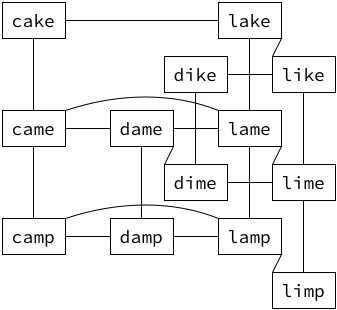 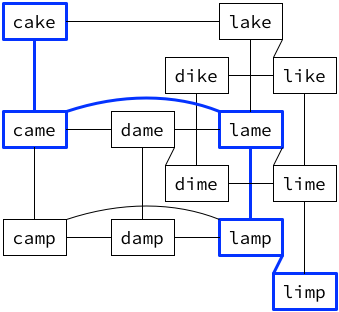 There are several benefits of thinking about a problem in terms of abstract data structures like graphs, including:

3. Description and complexity of algorithm

With the bug noted in §1 fixed, what your program does is to generate all the simple paths (paths with no repeated nodes) in the graph of words beginning at start, until it finds a path that leads to end.

But this can take a very very long time:

Why does the algorithm take three-quarters of an hour to find this result? Well, the graph being searched looks like this: 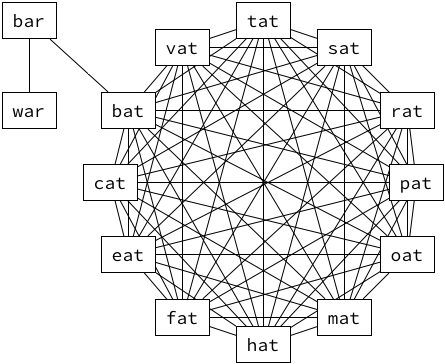 The algorithm starts at bar and keeps adding nodes to its path until it can't go any further without repeating a node. For example (depending on the order in which the words are retrieved from the set), it might end up with this path: 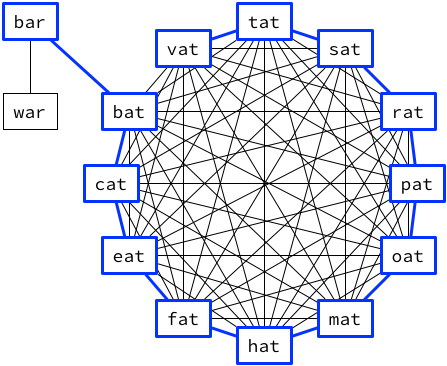 After backtracking a couple of steps, it will find this path: 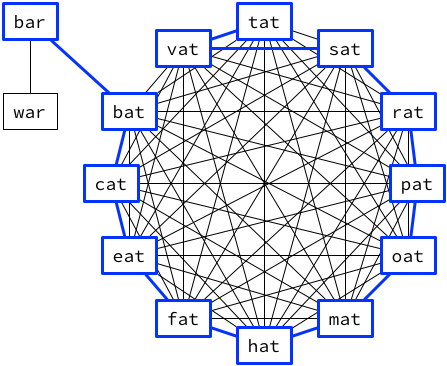 It is possible to do much better than this if you use one of the standard graph search algorithms such as Dijkstra's or A*. Here's an implementation using the latter.

So this finds shortest ladders on large sets of words in a reasonable amount of time:

You have chosen to require both strings to be the same length. That's fine, but perhaps you would like to also consider adding or removing one letter to be a difference of one.

A simpler way to write this function would be

The drawback is that it won't short-circuit as soon as it finds a second difference. For short words like your test case, I don't think that matters.

potential_ans[:-1] has no effect. It produces and discards a copy of potential_ans with the last element omitted. You probably wanted potential_ans.pop().

But that's not how I would recommend doing backtracking, if you are still confused by how to pass data around. The good options are either:

Option 2 is rather tricky to implement, so I recommend that you should stick to your recursive approach.

When doing recursion, you should not think of functions as procedures with side-effects. Rather, treat them as functions in a mathematical sense: the function must produce one deterministic answer based solely on its parameters, and result in no side-effects.

You could possibly improve efficiency by using append() and pop(), but you should be sure to fully understand how to do recursion properly before you mess with such mutation operations, because they have side-effects.

I've removed the count parameter, since it was just a cumbersome way to initialize the chain.

I'm going to focus on implementing the recursion.

First, let's avoid the globals. The easiest way is to keep the same structure, but move it into a local namespace:

I've mainly just made transform a function sets up the right arrays, and then converted the original implementation into the nested function recursion. Notice I've created a results array for storing the results. Also notice the need to make a copy of the potential answer when storing it as a result, since we will continue to modify potential_ans.

I've also modified the list of words so there is more than one result.

I assume you want to obtain all answers; it shouldn't be hard to modify this to end the recursion as soon as an answer is discovered... however, a better approach will be described below.

Given this change, the arguments to recursion are redundant: it can be changed to the following. (if you're really serious, you should profile this change, to determine whether it actually makes things faster)

Now, a better way to generate a sequence of results is to, well, use a generator:

Note the use of yield and yield from for yielding results. Using generators has a number of advantages including: you get to see results as they're created, you can stop iterating when you're happy with a result, rather than having to wait for the entire recursion to finish, you don't waste memory/time creating a list of all the results.

Generators take a little bit of time to get used to, but they're well worth it, and should often be preferred to returning lists of results.

Finally, one last neat trick; the general pattern of "make a change ... do stuff... undo the change" can be error prone; it can be easy to forget to undo the change, or an odd code path (e.g. an exception) skips the change.

The other answers suggest making copies; however, backtracking algorithms like this can often suffer massive performance penalties from such a change, so it's worth knowing a pattern that mitigates this problem without introducing copies.

Proviso I have not checked the logic of your code, mostly just the styling and language features you could have used but missed.

Make your functions single use

This is a general rule of programming, but one I have found especially good to enforce in Python, particularly because lots of small, single-use functions just look so beautiful when you code them up in PEP-style (which I am far from good at myself). So I'm not sure why you're printing in transform. Generally, you should try to keep logging as its own function, separate from calculations and the like. This is especially true in your function where you print the result and then return it. Why not return and then print wherever you return from, to make your code easier to maintain and understand?

It's easy to avoid globals in Python

You mentioned that you didn't want to use global variables. You don't have to. You can pass a variable to a function whenever you find yourself worrying about manipulating globals. You don't want your function in any way to depend on the name of a global if you can avoid it. There are many ways to fix this. One is to wrap your global in some kind of sensible class object. Additionally, and complementary, you should pass everything into your function as a parameter, even if it is a global, so you can do something like this:

Python is passing something like a reference, so the changes you make to potential_ans will persist, at least when you do things like appending letters. Read more on this from this SO post.

Seems like you go through your english_words more than you need to. Why don't you break out of your for loop once you find the match you need?

Also on efficiency, I'd recommend doing the start==end check after the count check.

This might be more efficient (easy to test) and it's certainly clearer and more succinct than the count check you are using now.

Confusing parts of your code

What does count do in transform? I see you increment it sometimes in transform and you also use it in is_diff_one. As a reader of your code, I wish you'd comment on whether there counts are related...is this some funky global variable manipulation or just your favorite count variable name? This is exactly where comments can save your reader a lot of work.

Actually, why do you set up potential_ans as a global variable when you redefine it inside your function anyway? Why don't you just initialize it yourself and keep passing it as a parameter (see above). This is a design decision, so you should comment here to explain to your otherwise puzzled reader.

What is the point of your last expression in your for loop over english_words, this one: potential_ans[:-1]. This one has really got me puzzled. Are you changing something? So far as I know Python syntax, you're simply referring to the last element of this list but not doing anything to/with it. Am I missing something? If so, a comment would help here. If not, this should be deleted as it doesn't affect the program at all apart from running an unnecessary expression.

Not the answer you're looking for? Browse other questions tagged python algorithm edit-distance backtracking or ask your own question.

3
Array-search algorithm for identical sequences and character distances
9
Finding the length of shortest transformation sequence from start to end
4
Finding a word ladder using Breadth First Search
3
Word ladder solution in Java using matrix
4
Change one word into another by picking words that differ by one character
5
Making sure a sentence exists of words in a dictionary
6
Find matching dictionary words given a Scrabble tray
3
Reddit Challenge #383 Python
0
LeetCode 1320: Minimum Distance to Type a Word Using Two Fingers II
7
A simple word autocompleter meant for use in a shell