This is a contest problem. The entire description is here.

The walls block the light forming a cone with low profile. So, in how many of the given points its possible for the soldier stay in low profile? (A point that stays exactly in the cone line is not valid)

Here is a image describing what I want to say:

The points g3 and g1 are not valid. 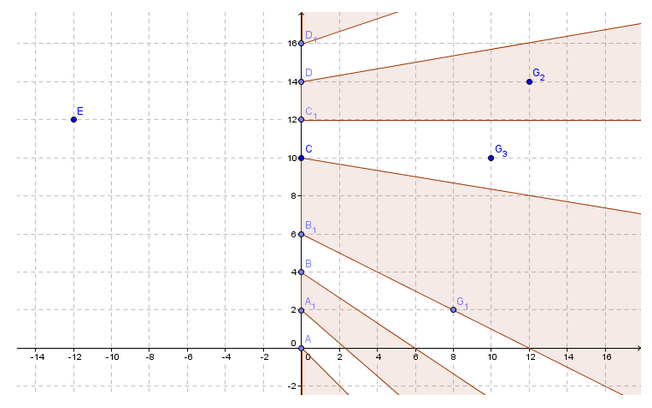 All the coordinates will be between -10^4 and 10^4 and will be integers. The epicenter of the explosion will have X < 0 and the hides positions X > 0. The initial Y of a wall will be strictly less than its end. The walls will not be sorted. The walls won't overlap each other, nor share endpoints. There might be some repeated Goemon positions.

My solution test for each point if it is inside of the cone formed by a wall (if the point is above one line and below other line).

The problem is that this solution is too slow, resulting in time limit exceeded. How can I optimize it?

You can get the intersection of a line described by 2 points with the y axis pretty easily using a simple formula.

Beyond that some comments about your code:

To check if the point \$G_i\$ is in cover the point should be projected onto the Y-axis along the line through \$G_i\$ and \$E\$. Then see if it is inside of any of the walls.

We take the line between the points using the straight line equation and solve for the coefficients: \$y = kx+m\$ inserting coordinates for \$G_i\$ and \$E\$ yields two equations:

At this point we could calculate the above \$m\$ using floating point numbers and convert all the wall positions to floating point too. But we introduce errors, errors that might give the wrong answer if the point is exactly on a wall (which should be unsafe).

To get rid of the division we will multiply through by \$a\$ but need to take care to flip the inequalities if \$a<0\$, so we get:

Now we can implement the solution using only integer arithmetic.

This is some pseudo c++ code for implementation (I have a fewer so I make no guarantees on correctness here).

I see a number of things that may help you improve your code. First, I'll analyze your code, and then explain a different algorithm and implementation that should be much faster.

Most of this code is plain C that just happens to have been run through a C++ compiler. Your code would be much easier to read and much simpler, if you use C++. For example, the typedef struct form is completely unnecessary in C++.

Putting using namespace std at the top of every program is a bad habit that you'd do well to avoid. It isn't necessarily wrong to use, but be aware of when you absolutely shouldn't do it (such as in header files).

Avoid scanf if you can

There are so many well known problems with scanf that you're usually better off avoiding it. The usual approach is to read in user input into a string and then parse from there, in this case using something like atoi().

Modern C++ has much less reason to use new and delete than in the past. For this particular problem, it can be avoided entirely as I'll show later on.

I've labelled the coordinates \$b'\$ and \$G_y'\$ to signify that this is with the shifted coordinate system.

The standard template library (STL) has a number of very useful data structures and for this particular problem, I'd choose std::set. We can maintain a set of wall segments and then quickly identify the wall segment which might be a candidate for intersection using std::set::upper_bound. By creating a Wall class that defines a comparison operator that looks at the hi part of a wall segment, we can use upper_bound directly. Here is a Wall class with all of the required properties:

Now all we need is a class to store the Wall segments and to do the calculation mentioned above:

A few things to note are that:

Here's sample code showing how it works with the data corresponding to the graph in your question:

I'll leave it to you to put the rest together.

Not the answer you're looking for? Browse other questions tagged c++ programming-challenge time-limit-exceeded computational-geometry or ask your own question.

9
Count number of isosceles triangles in a set of points
7
Shortest Path For Google Foobar (Prepare The Bunnies Escape)
2
Counting pairs of numbers that differ by a given amount
8
Given a collection of points on a 2D plane, find the pair that is closest to each other
2
Google Foobar challenge: Exiting a space station maze, where one wall may be removed
7
Counting points on a given irregular grid that are inside or outside a circle
0
Given points on a 2D plane, find line that passes through the most points
3
GreetingCard problem with Coordinates
7
Counting the triangles that can be formed from segments of given lengths
7
Generate points for smooth movement between two given points