I felt nostalgic recently, and decided to install a Commodore-64 emulator. C-64 BASIC 2.0 is the first language I ever programmed in... some 20 years ago (yes, C-64 was already well beyond deprecated by then).

Implementing a simple fizzbuzz in such a limited language, and un-learning pretty much everything I learned in at least the last decade to write code in a procedural paradigm with GOTO and line numbers, was much more fun (and tricky!) than I had imagined.

Here's the code - I limited the output to 15 values, so as to be able to see the full sequence on-screen. 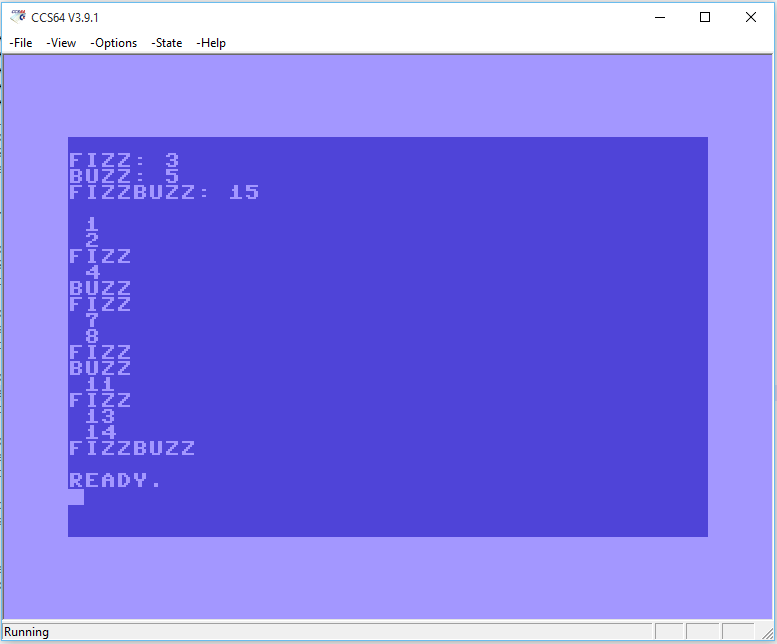 This will sound very weird, but it's actually a pretty big concern with C-64 code, so don't laugh (ok, laugh, but it's not a joke): how's my line numbering?

I tried to write the code in such a way that it would be easy to extend into prompting the user for MIN% and MAX% values, but also for FIZZ% and BUZZ%; I was also concerned with implementing a "modulo" subroutine, since I knew that logic would have to be used in 3 places.

I lost quite a lot of the language's capabilities over the years (the biggest challenge was really to stop thinking in terms of objects and methods for a while). Is there something in the language that could help improve this code?

Other than that, any inconsistencies or weirdness in sight?

First off, thank you for reminding me of the good old days !

Well, it is not really a bug, but as you know the % suffix indicates that the variable will be an integer

but you are assigning the result of STR$() which is a string to it. Be happy that commodore basic just forgive such things.

So changing RESULT% to RESULT$ will help, but nevertheless this STR$() method is called to often because if the modulo returns 0 the value is overwritten. So placing this on the line above the PRINT RESULT$ will make it more shiny.

Defining and calling a "function", will reduce some of your GOSUB calls and will make your code more pretty.

So I would suggest to define 3 functions like so

Style is important in a procedurale language. With the extensive use of GOTO and GOSUB it is very important to distinguish between the parts of the program.

By adding an "empty" REM in front and after the "defining" REM of a "sub" it is easier to grasp what it is about. It then looks like you would group logical parts by a new line which unfortunately can't be done by only a line number.

Another way to do this (which can look cleaner than a REM with no text) is to leave a line with just a ":" on it.

Applying this would result in

the code lines which aren't used anymore or have been moved

btw, I didn't test the resulting program because the emulator won't let me load a file. Pasting code isn't working either. I tested the MOD stuff and it worked.

Just for grins and giggles for anyone who's old like me, below is a TI BASIC version of the OP's code. Note that TI BASIC (and even TI Extended BASIC) didn't have a concept of integer arithmetic. It was all floating point. Also, the language itself wasn't just interpreted, like most BASICs of the day, but it was interpreted by an interpreter - that is - the BASIC interpreter was written in a language called GPL, which itself was run under the GPL interpreter in the console. Further, users' programs were stored in a port-mapped memory called VDP which was read or written through a single memory address one byte at a time. This lead to the language's notorious slowness compared to its contemporaries. History lesson-slash-rant over :)

Not the answer you're looking for? Browse other questions tagged fizzbuzz basic-lang or ask your own question.