I have this HTML down below that creates a list with two columns, the left one containing profile information, and the right one containing checkboxes of the user feedback in a horizontal list.

The list behaves so that when the element of the questionAnswer array is true, there is a font-awesome checked square, and when it is not true, there is just a bold square.

The checked boxes need to change color depending on a property of the object which, the way I chose to do it here, contains the name of the corresponding css class.

Then in ng-class, I stipulated that the color should be black, providing that the value of the ng-repeat at that point is false.

Is there a better way to do this? Should I write a directive instead?

Here is the current behavior visualized. Note the color changes in relation to the choice in the "You" field: 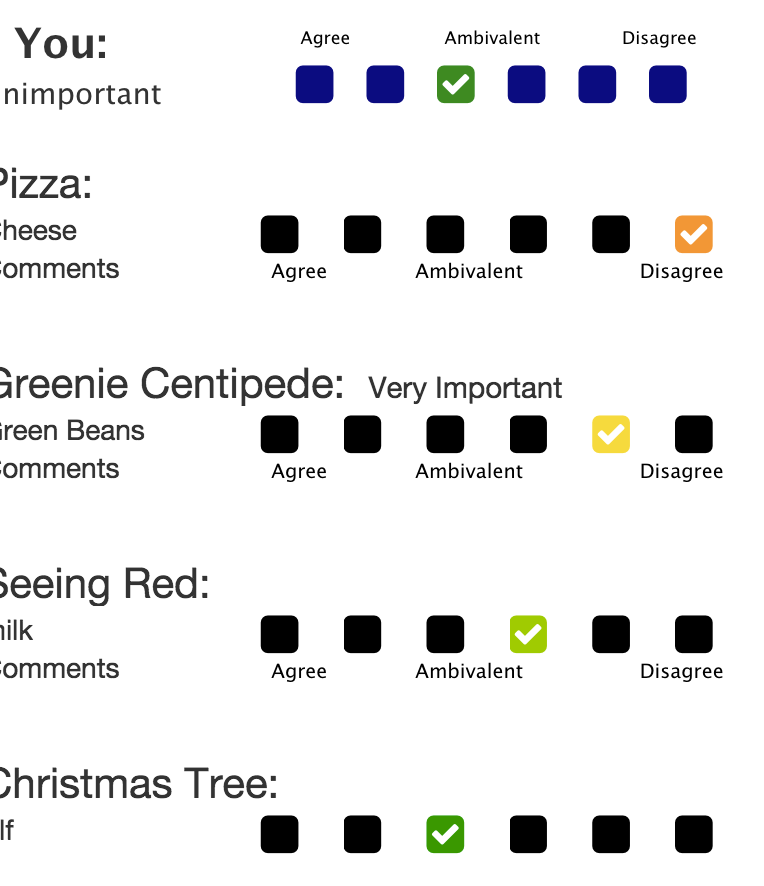 In your $scope.profileCompare object, you have multiple objects like this inside:

You have objects like in $scope.profileCompare that are all being displayed to the HTML using ng-repeat.

Hmm. Let's think about this. You are repeating very similar objects all dedicated to one purpose in your HTML... sounds like it's time for a directive!

Angular's directives allow for HTML to, like normal code comments should, explain why and not how.

It is much easier to read HTML code that has a directive in it than it is to guess about the how the rendered HTML tags would look on the user's screen. When someone is just reading your HTML code, that doesn't matter.

That is basically what the directive is going to look like. However, this doesn't do anything yet: we still need to add the HTML.

Creating a directive from existing HTML is quite easy in fact, especially if you were already using ng-repeat to show these elements before.

To get the HTML for our directive, we must first find the section that we are repeating and cut that all out.

I did a little searching through your HTML and found this:

So now, the next step is really simple:

After you've done that, our directive now becomes:

Now, the directive is going to show whatever HTML is inside the profiling_checkbox.html file, which is the file that you just created.

This step is relatively simple:

Now, this directive can only be used in element-form.

There are still some problems with this directive. The biggest one? Scope.

To fix this, we can add a scope property to the object that our directive is returning. This property allows the directive to define attributes that it will read and then pass on to it's template in it's own scope. This makes sure there is no overlap and repeat when using multiple elements with this directive.

Right now, the scope property is empty. Before we populate it, we need to figure out, "What do we want to put here?" and "What does the template need?"

Well, it's quite simple to find out what the template needs: the original HTML code was in an ng-repeat so the template is obviously going to need whatever was in the ng-repeat.

After looking at your HTML again, it seems that the children of that element that was isolated above only use the profile from the ng-repeat. That being known, we can now change our directive to this:

This may be a little confusing. Basically, what this is saying is that the directive is going to read the attribute by the name "profile", and pass it on as a "parameter" to the template under the name "profile".

When using the directive, it would look like this:

If we just wanted the attribute to be "p", we could write:

Then, the using the directive would look like this:

Now that we have this handy-dandy new directive, we should probably move some of the code of our main controller into this directive's controller. That way, the information that the directive needs to know is with that directive and not spread out somewhere else in the code.

To add a controller to our directive, we simply need to add the controller property to the object that we are returning:

Now, all the controller information would go in this function. It is just like a normal controller that you would write.

Note: Although I am not 100% certain, you may need to add transclude: true to the object that you are returning. This will allow the controller to access to the scope outside of the directive, rather than just in the directive.

For example, you might want to move $scope.currentUser and $scope.profileCompare

You have this giant clump of element tags in your CSS file:

You aren't even using half of these. I recommend that you all of the elements that you do not need; it's adding serious unreadable noise to your code.

There's a few points to point out about this:

The following snippet's parent block needs to be DRYed:

It's basically indentical code, except for differenceBetween and _*0pcnt.

The keys in $scope.profileCompare seem a little superfluous, you can just use a general array there, with array indexes instead.

What happened to the indentation here?

There should only be one currentUser, and with that having You in there is superfluous, by keeping it as an object just with the questionAnswer and questionImportance would be much simpler.

Not the answer you're looking for? Browse other questions tagged javascript html css angular.js or ask your own question.