We've been hard at work creating a browser-based GUI/Client for playing the Cardshifter TCG for the past week or so. Today, I just finished doing a pretty complicated layout for the chat lobby, along with @SirPython who put together the JavaScript/AngularJS code, which I will include with his permission.

Here's the full repo on GitHub, in case you're interested. 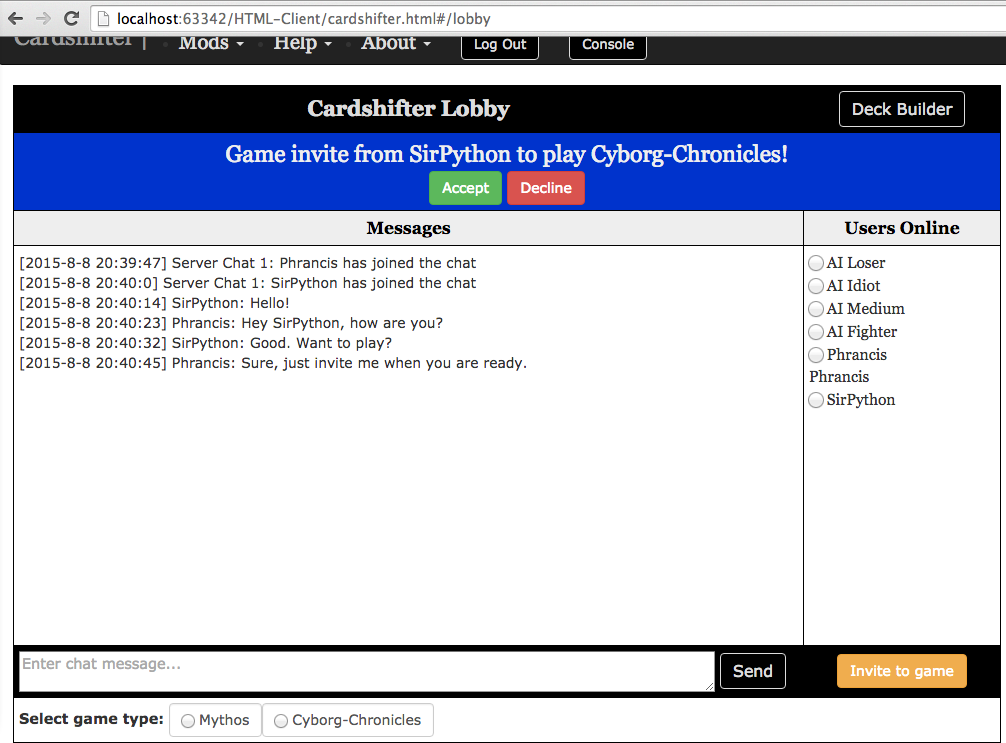 I have not worked with table-based HTML/CSS layouts for a long time, and I wanted to know if the code was well-structured, if I'm using CSS and Bootstrap efficiently, etc.

Here is lobby.html. Note that the sections of text {{in brackets}} are injected by Angular. The header and other things are in a separate "mother" HTML file, where this child page (and others) get injected with the flow of the game.

Here is lobby.css which is linked to it. Note there are a number of empty selector classes, which all exist but some are not being used at the moment, and may be in the future if needed.

Here is the lobby_controller.js, it is AngularJS written by @SirPython, which links the client to the server messages:

Background: I work as a web developer at a company. I'm the only Angular guy here, and we are using Angular in our greenfield CRM project, so my answer will mainly address Angular (as no one else has here).

First thing is first - you're using lots of id attributes. Generally speaking, you only want to use id when it

You should not use IDs for style hooks. I personally avoid using them entirely, unless I want to use same-page anchors - I prefer to use classes prefixed with js-* or, when I have access to Angular (like you do), I prefer to use directives, when I want JavaScript interactivity.

Inline styling is bad practice - you really want to separate presentation and content where possible, and that includes separating your CSS from HTML as much as possible. Use CSS rules to apply any styling. You can use any methodology you like - I prefer the BEM model of CSS, but the Bootstrap model is fine as well or semantic HTML also works.

Don't use $scope where possible. It's being removed in Angular 2.0 and makes your code hard(er) to reason about. Instead, use the controllerAs syntax. This uses $scope under the hood, but ensures that you don't fall into any of the nasty prototypical pot-holes Angular throws your way when you use isolation scopes. It also makes your templates easier to reason about because you can clearly associate things - lobby.user makes a lot more sense than just user.

I do not swear by using data-ng-* attributes. When you use directives you are essentially creating custom elements, which, by specification, have attributes that are not prefixed by data-*. In addition, browsers ignore unknown attributes - take care to not make an attribute with the same name as one in the specification and you're fine, in my opinion. If you are going to prefix everything with data-ng-*, then do it in a build step; angular will strip out any data- prefixes automatically.

Never access window, especially not from within a controller. window is DOM access, which is bad; use $window. DOM access should be restricted solely to directives. You are allowed to use $window in the controller, although you almost certainly want to use it in a directive instead.

$window is Angular's own version of window which is wrapped in its dependency injection container - this allows you to mock it should you wish. You can't do any such thing with window.

Your Angular code is not very separate at all. Your controller is doing a lot of things. For example you have a lot of constants - CHAT_FEED_LIMIT - that should really be angular constants instead. As I mention below, controllers should only glue the UI and any user state with the rest of the application; they should be pretty dumb and do no work, similar to the MVC model on the server side.

You want to split your code as much as possible so that you only have one responsibility per thing.

This seems like a namespace on window. You shouldn't rely on things being in window with Angular. You have a killer dependency injection container, and you should definitely use it. In addition, new CardshifterServerApi.messageTypes.ServerQueryMessage("USERS", "") is strange. I don't know what this does (I've looked briefly into your source but couldn't ascertain), but it looks very weird (to me), and this ties into the dependency injection note I made; you could very easily use Angular to inject this as ServerQueryMessage and then do new ServerQueryMessage() instead. This looks a lot nicer and eliminates the requirement for your window dependency in this instance.

Your CardshifterAPI itself seems like it has too many responsibilities. I realize it is a self-contained script that is loaded before the rest of Angular code. Relying on code order is a maintenance nightmare - I would recommend using webpack or browserify and/or trying to convert your CardshifterAPI file into an Angular module.

No. Use tables for tabular data.

No. Don't use !important. !important is almost always a sign of not understanding the cascading behaviour of CSS. The only time you ever want to use !important is when you need to override something in 3rd party code that you cannot override usign specifity.

Turn it on, learn it, love it. It gives you lots of benefits for free and forces you to write standards-compliant javascript code.

Access of $parent is again, usually an indication you're doing it wrong(tm). Use directives in tandem with isolation scopes. If you use $parent you directly couple the calling site to the heirarchy of your scopes which makes your code non-reusable. Instead of

Create a directive that takes selected-mod as an argument, then assign it to the scope using two-way binding. Here's an example:

Obviously, this could be improved, but this looks a lot more semantic. Caveat: You cannot dynamically generate names, so you won't be able to use expressions with the name attribute. In essence, this means that you would not be able to reuse this directive for anything else (no dynamic radio lists).

On controllers in general

I'm of the opinion that there's no reason to have standalone controllers any more. As you may have noticed in my above example, I sepcify the controller directly in line. This is because in Angular 2.0 controllers are going away (as is $scope). Controllers are almost always only ever coupled with a route, directive or ng-controller and there's never really a need to test them in an isolated environment because they should only be used to glue UI code to service code. As a result, I also feel that your current controller is essentially a god class and you should refactor a lot of the code out of that into services.

For example, acceptInvite knows how to both construct the message it needs and send it. This should instead call a service that does all of the heavy lifting; the only thing that should be in controller is UI state (again, in my opinion). For example, instead of

I would prefer this

This won't work like you expect; use ng-value instead. Before angular loads, value will have the value of {{mod}}. ng-value ensures that this value isn't set if Angular doesn't load. Also, that lets you use an expression isntead of having to specify {{}}. For example, value="{{mod}}" becomes ng-value="mod".

This is all I can think of right now. The main take aways are to use directives, remove inline styling. There's more I'd do, but I have limited time :-) Maybe I will contribute.

Well, there's lots of code needing review. I've done my best to split it into each language. I've avoided reviewing Angular, since it's a library I'm not comfortable with.

There isn't much to be said about your JavaScript.

This is a clear and obvious misuse of the table element. Tables are for representing tabular data and that's it. Would that same content make sense in a spreadsheet? If the answer is no (as it is in this case), then don't use a table. Use CSS for controlling your layout instead.

You don't have a single non-id selector in your CSS. That is some serious code smell. By doing this, you're essentially implying that each element in the document has absolutely nothing in common with anything else. Really? There's no place where an element selector would be appropriate (psst, if you were using semantically appropriate markup rather than tables and divs, you would actually have different elements you could use as style hooks)? Or a class? Or a descendant selector?

!important when you don't need to

You're only using ids throughout your stylesheet and everything has the same specificity. There are very very few cases where !important is appropriate and this isn't one of them.

You must have a unit for border (border-width) unless the value is 0.

Unless you need to preserve previously declared values, you're going to get more compact CSS by using shorthand.

There's not much to cover, other than the things @IsmaelMiguel went over, nonetheless:

This is less of a important thing, as a style thing, but:

I find it better to stack things alphabetically, or alphabetically in groups (for example: align, colors, fonts, text), or, you can stack them by line length. This point also applies to JS as well.

It's better to keep the order of things the same for lists, rather than swapping them. Also, the .log text is pretty clear, the comment is somewhat superfluous.

You have an extraneous line here, that's alright if that's your style, however, keep it a constant pattern throughout your code.

Not exactly sure what's up with this:

Slightly pointless, and deserves a capitalisation and period.

Instead of concatenating like that, I find that it's better to join instead.

You can even do it with the final combination:

It's also a little easier if you want to expand or whatnot, later on.

You should avoid having to manually update that, instead, by fetching the keys from the object. Something like this would work:

Like Chat.SE, the @ pinging system could be implemented, similarly with a sound, and highlighted name. And similarly with Chat.SE, giving the server chat a special colour like mods have on Chat.SE would be nice, otherwise I trouble-makers might be tempted to sign up with 'Server Chat 2' as a username and confuse everyone.

You should use strict mode in your JS scripts. It will allow you to avoid a lot of common mistakes.

See the section "Changes in strict mode" in the MDN article I linked.
Some of the advantages of using strict mode:

Not the answer you're looking for? Browse other questions tagged game css html5 angular.js twitter-bootstrap or ask your own question.